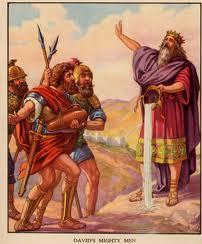 See you next time,
Arlen
Posted by Soulwinnersr.us at 12:32 AM

Email ThisBlogThis!Share to TwitterShare to FacebookShare to Pinterest
Labels: Bob Huggins, fighting spiritual battles, Jesus and the story of the sparrows, Mighty men

yes , you can and are arlen, every day you and i submit ourselves to jesus and walk and talk close to Him as we go through our day at home and work fully armed with eph. 6 armor, matthew 6:33'ing and john 15'ing ... then you and i are two of His mighty men!! all by His grace and mercy and power sharing His truth and love with other men and women, some who know Him and others who will come to know him ... thanks for sharing your story in this blog!!!

Great thoughts, Arlen! God can work in ALL of us. We can also be mighty men - in Him (even when we're women LOL)

Thanks Bill and Jo. Bill, you are definitely always thinking of how to witness to coworkers at work and are much more open to share it than I am. I admire that and want to not be so reticent to share. Jo, I was thinking of women too when I wrote the last sentence.