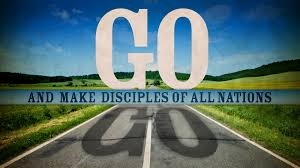 I’m so glad you stopped by. My blog today is about a concern that I’ve had for some time now, but has recently come into more focus for me. It’s about “The Great Commission”.

I gave my life fully to the Lord nearly 40 years ago on the day of my Amish Grandpa Yoder’s funeral. During that time I have attended many churches. Some people might even be inclined to call me a “church hopper”.

I think perhaps I have attended so many churches because I have been looking for something that has been evasive for me. I grew up in a Mennonite church. After giving my heart to the Lord I attended a Grace Brethren, a non-denominational, an Alliance for Renewal, an Assembly of God, a Nazarene, and an Open Bible church. I also visited many other churches along the way.

Each church has different emphases. The Mennonite church started out being moderately conservative with men and women sitting on opposite sides and evolved into being less conservative with a strong peace, non-resistance, anti-war stance. The Grace Brethren church had a radio program and was labeled “the friendly church” and did have some evangelical leanings with weekly altar calls. The non-denominational church had many former Amish/Mennonites and the emphasis was on what the Holy Spirit could do for a person.

The Alliance for Renewal Church was called “the hippie church” in the 70’s, and had a strong tradition of community with many people living on the property or nearby. The Assembly of God Church was Pentecostal in nature and had a little bit more open and exciting worship and some speaking in tongues. The Nazarene church had an emphasis on holiness and discussion of a second touch of God. The Open Bible Church I attend now is also Pentecostal, has exuberant worship, and strong intra-church community with a wonderful mix of older and younger people.

Finally, at the age of 63, I think I have discovered the missing ingredient in myself, and I propose, in the churches I have attended. I think it’s a lack of focus and training in The Great Commission. In other words, I think we, for the most part, have had an inward focus rather than an outward focus.

Most churches have much focus on what happens between the four walls of the church, but perhaps not much thought or discussion about outreach and making disciples as Jesus did, and as He taught.

Jesus went to the temple, but he did not live there, or even spend very much time there. He was out meeting people in their communities. He went to them, and did not expect them to come exclusively to him. He wanted to make disciples, not only temple attenders.

I think when the church focuses attention only on getting people inside the walls of a church I think it is missing the mark. I think that if we/I could learn to make disciples outside the walls of the church, the church itself as a whole would become more vibrant and exciting.

(Note: I am not trying to minimize the importance of having church bodies for people to attend. I think they are vitally important. I desperately want a church to invite friends and relatives. But I think the excitement and vibrancy of church bodies, and the church as a whole, comes from the members knowing that most of the work goes on outside the church walls, then extends inward.)

I value your opinion about what I've written in this blog post and welcome discussion about it.

See you next time,
Arlen
Posted by Soulwinnersr.us at 4:44 PM No comments: