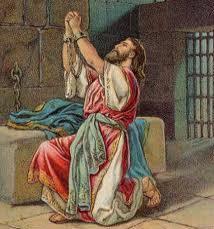 (Note: I hope you enjoy this series of blog posts. I designed the posts to try to encourage you. They are written in story format, and I took some literary license to tell “how it might have been”. This story is based mostly on 2 Chronicles 33.)

King Hezekiah was such a good king in Judah, so I’m not sure what happened to Manasseh, Hezekiah’s son, to turn him into such a scoundrel. I had a first-hand look at both being a military commander. I almost worshiped the ground Hezekiah walked on. He made such a difference in our lives. He gave hope to thousands. Manasseh, however, was a different story.

As I wrote previously I was a young man in my twenties when King Hezekiah appointed me to be a military officer when Sennacherib, king of Assyria, had all his forces situated on the hillsides surrounding Jerusalem. Looking down over the wall at the masses of enemy soldiers made most of us cringe with fear.

But King Hezekiah and the prophet Isaiah were undaunted as they cried out in prayer to the Lord God of Israel. Then from the wall in the darkness of night we all saw a bright light hovering over the enemy encampment. Then we heard shrieking cries of terror. King Hezekiah and Isaiah did not even watch as the angel of the Lord cut down the enemy. They were absorbed in their all night prayer vigil to the God of heaven.

When King Hezekiah died the news spread far and wide among the surrounding nations. He made some mistakes at the end of his life, but Hezekiah was beloved by all of Judah and Jerusalem, and the mourning at his passing was great. Manasseh, Hezekiah’s twelve year old son, inherited the throne.

I was still a fairly young commander of approximately thirty years old when Manasseh became king. I had high hopes at the beginning of his reign. I thought surely he would follow in his father’s footsteps of being a good and godly king. I was very wrong.

He started slowly in changing the religious life of the people of Judah. It started with building a high place to a foreign god. He built it, if you can believe it, at the exact location his father had torn it down. What was he thinking? Then to make matters worse he ordered more high places to foreign gods to be constructed and he openly consulted mediums and spiritists. But nothing can compare with the depravity of Manasseh sacrificing his own children in the fire of the Valley of Hinnom.

I was attributing this lack of godliness to his youth. After all, Manasseh was not born yet during the time when his father and Isaiah prayed and Jerusalem was saved by the hand of an angel. But he persisted with these evil deeds into the twentieth year, then the thirtieth, and even into the fortieth year of his reign. There seemed a deep sadness and a foreboding darkness during that time. The presence of the Lord, so vividly felt during the time of Hezekiah, felt very distinctly missing.

The Assyrians sensed the departure of the Lord from Jerusalem, and they became less and less afraid. They had heard rumors of the angel’s destruction of their armies at the time of Sennacherib, but now it seemed far removed and almost not real. They surrounded Jerusalem just as they had in the past, but the outcome was different. They captured the city and took Manasseh as their prisoner.

I was an old retired soldier by this time and the Assyrians knew I was not a threat to them. They let me and my family alone. But there were stories that the Assyrians humiliated Manasseh by putting a ring and hook in his nose and that they led him around like an animal. They took him to Babylon, as well as the remaining soldiers not killed in the battle.

Several years passed and the Assyrian king assigned a governor and a small regiment of soldiers to rule the city and surrounding lands. Things were relatively peaceful, but there was unrest among the remaining people of Judah as they still felt oppressed by the void of not hearing God’s voice. Several of us elderly former leaders who remembered the prayers of Hezekiah called an assembly. We prayed fervently to the God of heaven.

We did not know what to expect and the spiritual darkness persisted. But we did not give up. After a week of daily prayer we saw a group of about a hundred men walking on foot approaching our city. They had no weapons and did not seem to be a threat to our safety. The man at the front of the group looked vaguely familiar, but I could not distinguish him with his long beard and disheveled clothing.

As he and his companions entered the city gate the straggly man announced himself. He said he was Manasseh; our king who we thought likely dead. I looked closely and it was indeed Manasseh, albeit a scrawny version. Why had he come back? He was an evil king and was the last person I wanted to see return. Manasseh tried to convince us that he was a changed man. He said that he prayed to the God of heaven as did his father Hezekiah before him, and God gave him favor with the Assyrian king. The men accompanying Manasseh confirmed his statements. They said that he had in fact prayed loudly and fervently for the past week from his dungeon. They said Manasseh had no regard whether he would be so annoying to the Assyrian king that he would call down harm upon himself and his men.

They said within one week the Assyrian king had enough. The king reported having a dream with orders directly from God to release Manasseh and every one of Manasseh’s men. The Assyrian king said the dream was so vivid that he knew that he would be destroyed if he did not obey.

So here was Manasseh again in our midst. He seemed different, but time would tell, and I fully expected him to go back to his evil ways. But he didn’t. He started doing things reminiscent of Hezekiah, his father. I never thought I would see a day when King Manasseh would tear down an altar to a foreign god instead of building one. After he tore down the first one he continued to tear them all down and throw the remains outside the city. Then he restored the temple and the wall. He was also often seen lifting his head and his hands to heaven to pray, and he entreated all Judah to do the same.

I was in my eighties when King Manasseh came back on foot to Jerusalem. I thought I had seen the last of God’s glory at the end of the days of Hezekiah. I was gladly mistaken. Where there is prayer to the God of heaven there is always hope.
Posted by Soulwinners'R'Us at 1:15 AM